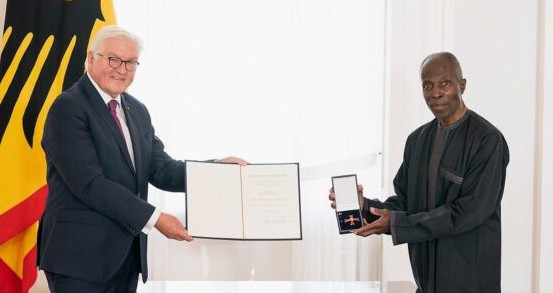 L- President Frank-Walter Steinmeier handing over the Bundesverdienstkreuz to Akinbiyi Akinbode at the Schloss Bellevue, Berlin, on 1 October/Photo: Bundesregierung

A Nigerian, who has been living in Germany for more than four decades, has been awarded the country’s national honour, Bundesverdienstkreuz.

Akinbode Akinbiyi, a Berlin-based photographer, author and curator, was one of the 14 citizens conferred with the Order of Merit of the Federal Republic of Germany (Verdienstorden der Bundesrepublik Deutschland) by President Frank-Walter Steinmeier on 1 October to mark the German Unity Day. The honour, also known as the Bundesverdienstkreuz, is awarded for special achievements in the political, economic, cultural, intellectual or humanitarian fields.

Speaking at the award ceremony, Steinmeier said the recipients – six women and eight men – had made outstanding contributions to the arts and to cultural life, which has been particularly affected by the coronavirus pandemic restrictions. “With their extraordinary services, they promote solidarity and social cohesion,” he added.

“No part of the world can progress without the other parts. In times of pandemic, we are all more aware of this than ever. And this one, whole world is what photographer, author and curator Akinbode Akinbiyi shows us with his very own visual language,” the laudation read.

“His works promote a lively engagement with the African world.”

Akinbode Akinbiyi was born in Oxford, England, in 1946 to Nigerian parents. He grew up in England and in Lagos, Nigeria.

In 1972, Akinbiyi began to train as a photographer in a self-taught way and within a short time, he developed into one of the most internationally recognised African photographers.

His main focus is on the rapidly growing and rapidly changing megacities of the African continent, including Lagos, Kinshasa, Cairo, Dakar and Johannesburg. And he concentrates on the unspectacular everyday life of the people, seemingly without subjective interpretation of the person taking the picture.

Akinbiyi’s work has been shown at exhibitions in Frankfurt, Berlin, Dresden, Tokyo, Paris, Philadelphia, Johannesburg and Havana and has published in various journals. In addition, he was curator of various exhibitions of the Institute for Foreign Cultural Relations, including “STADTanSICHTEN Lagos” (2004) and “Spot on … DAK’ART – The 8th Biennial of Contemporary African Art” (2009).

In 2017, as part of documenta 14, he exhibited his work Passageways, Involuntary Narratives, and the Sound of Crowded Spaces (2015-2017) in Athens and Kassel.