The Nigerian Exchange Limited, NGX, has confirmed it received information concerning the transactions of the shares transacted by Femi Otedola.

Otedola acquired five per cent stake in First Bank of Nigeria, making him the bank’s single largest shareholder following the crisis that rocked the Board of Directors recently.

In a statement obtained from the Exchange and signed by Seye Kosoko, Company Secretary, FBNH Plc, stating : “We refer to our communication to the market dated October 22, 2021 on the above subject wherein we stated that we would inform the public of any substantial acquisition, upon receipt of notification from the shareholder.

This morning, October 23, 2021, FBN Holdings Plc received a notification from APT Securities and Funds Limited, that their Client, Mr. Otedola Olufemi Peter and his nominee, Calvados Global Services Limited have acquired a total of 1,818,551,625 units of shares from the Company’s issued share capital of 35,895,292,791. Based on the foregoing, the equity stake of Mr. Otedola Olufemi Peter and his nominee in the Company is now 5.07 per cent.

Meanwhile, shareholders of First Bank of Nigeria Limited have indicated that the acquisition of majority stake in the bank by the former chairman of Forte Oil Plc, Femi Otedola, if true, will unlock value for shareholders and turn the fortunes of the bank around for the better.

They posited that entrance of the billionaire business man into the bank would position the bank to retake its position as the first among equals in the Nigeria’s banking landscape.

Some of the shareholders who did not want their names disclosed said: “Otedola sold his 75 per cent direct and indirect shareholding in Forte Oil in 2019 through a merger of his business Zenon Oil with previous African Petrified Oil and they became all the more curious as to what his next move would be. He didn’t keep them guessing too long as he soon announced that he wanted to explore and maximize business opportunities in refining and petrochemicals.”

According to the shareholders: “Even though he also had investments in the real estate and financial sector, Otedola singled out First Bank for the single reason that there wasn’t exactly one man calling the shots there, unlike in other new generation banks.

“He wasted no time in taking advantage of the leadership crisis that rocked First Bank not too long ago that the Central Bank of Nigeria sacking both the chairman of the bank, Ibukun Awosika and Obafemi Otudeko, the chairman of FBN Holdings.

Otedola made his movements, and today he is a better person as a result of them.”
Speaking to Financial Vanguard on the development, Igbrude Moses, President,
Issuers and Investors Alternative Dispute Resolution Initiative (IIADRI), said: “If the speculation is true, it is a good move which I think will bring good tidings to the bank. Mr Femi Otedola has owned, and managed several businesses including transforming a weak and tired AP Plc to a brand new Forte Oil Plc.

“The experience of this transformation exercise makes me believe that his entrance into First Bank, if true, will add a lot of values and enhance shareholders and other stakeholders’ values.

“First Bank is strong and able anytime. It only needs to harmonize its strengths weaknesses, which require a strong and experienced character to lead and provide direction for the bank and these qualities Femi Otedola possesses. If First Bank, the sleeping giant, can be woken up, the banking industry will change.” 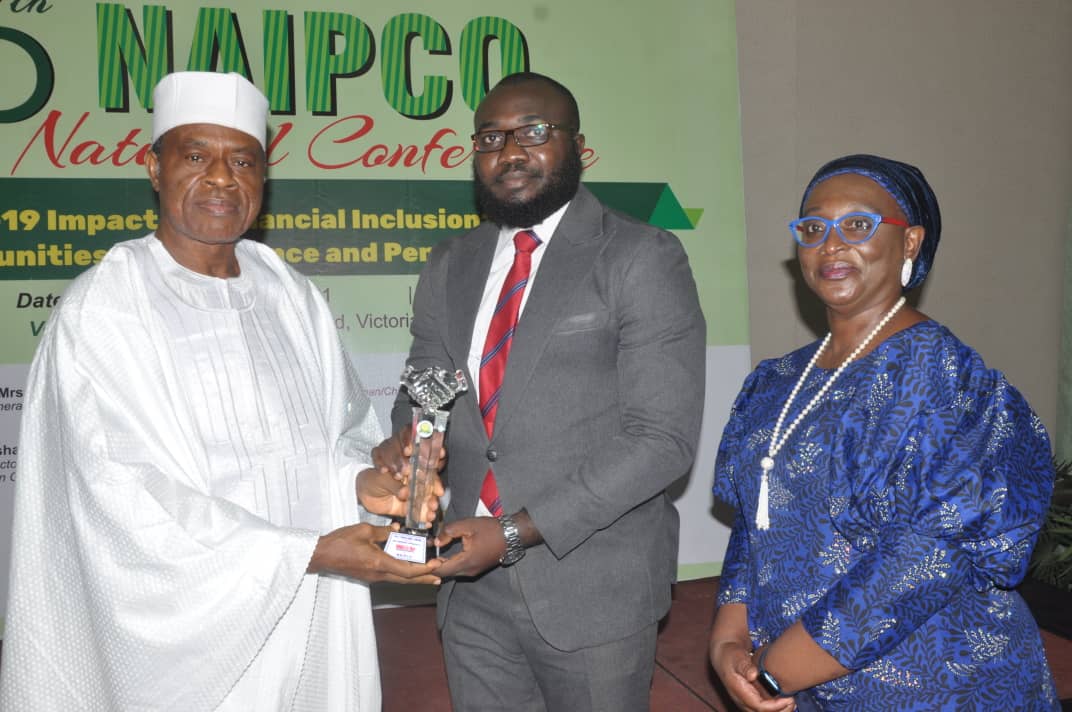 CAPTION
L- Nationsl Association of Insurance & Pension Correspondents, NAIPCO Conference Chairman, and Chairman/CEO, Prestige Insurance Brokers, Ltd, Prince Feyisayo Soyewo presenting the NAIPCO 2021 Excellence Award won by WAICA Re to Ayokunle Gbenga of WAICA Re, while the Former DG, LASPEC, Mrs Folashade Onanuga watches during the 6th Conference in Lagos.
By Favour Nnabugwu
WAICA Reinsurance Corporation (WAICA Re) has won the 2021 National Association of Insurance and Pension Correspondents (NAIPCO) Excellence Award for its outstanding Corporate Social Responsibility (CSR) in Nigeria and West African region.
The award was presented to the company at the recently concluded 2021 NAIPCO National Conference in Lagos.
After rigorous analysis of the performance of insurance and reinsurance firms doing businesses in Nigeria by the 2021 NAIPCO Conference committee,  the reinsurance firm won on most parameters, particularly on CSR.

The firm, had, in February this year, donated office equipment worth over N10 million to the Chartered Insurance Institute of Nigeria(CIIN). Equipment donated were; 39 air conditioners; 12 desktops and 5 laptops, which further shows the company’s commitment to the Nigerian insurance industry.

Speaking on the choice of the company, the Chairman, NAIPCO, Mr. Chuks Udo Okonta, said, the two CSR Projects were critical to the choice of WAICA Re.

Stating that, it is high time corporate organisations begin to look beyond their core businesses by contributing to the society they operate through CSR initiative, he said, this will lead to gradual growth and development of the country as government cannot do it alone.

He implored other companies to emulate WAICA Re in term of professionalism and CSR, which, he said, will not only create awareness about insurance and reinsurance awareness, it will equally lead to gradual uptake of insurance products and services in the country and on the continent.

While relieving the Award, the Group Managing Director/Chief Executive Officer of WAICA Re, Ezekiel Ekundayo, appreciated the association for counting the organisation worthy of the award, promising that, this will further spur the company to increase its commitment towards improving lives and reinsuring the insurance businesses across the West African Region and Africa at large.

Ekundayo, who was represented by Mr. Ayokunle Gbenga of WAICA Re stated that the corporation pays equal attention to all the countries its operating including Nigeria, which was the reason for the CSR projects embarked upon in the country. He said similar initiative has taken place in other countries in the region.