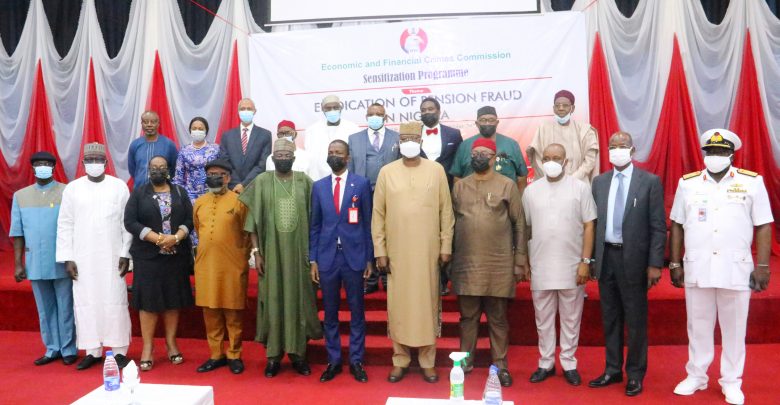 The Director General of the Commission, Aisha Dahir-Umar said that the workshop essentially seeks to examine the incidences of fraud in the pension sector in Nigeria and ways of eradicating the menace in a proactive manner.

She said the event will, no doubt, create the synergy needed to boost the efforts of the two organizations in the discharge of their respective statutory mandates relating to the theme of the workshop.

Represented by Mr. Clement Oyedele Akintola, Commissioner Inspectorate, she noted that the problems of fraud and mismanagement in the pension sector in Nigeria were amongst the reasons that necessitated the pension reform of 2004 by the Federal Government.

“The Pension Reform Act 2004, which was later reviewed and re-enacted in 2014, introduced legal and institutional frameworks aimed at addressing the rot that characterized the administration of pensions in the pre-reform era. The Act also established PenCom to regulate and supervise all pension matters in Nigeria, including the licensing of Pension Fund Administrators (PFAs) and Pension Fund Custodians (PFCs).

The Pension Transitional Arrangements Directorate (PTAD) was also established by the PRA 2014 to administer, in a transparent manner, the Defined Benefits Scheme (DBS) for pensioners exempted from the Contributory Pension Scheme (CPS).

These measures, according to her substantially restored credibility and confidence in Nigeria’s pension systems.

“Thus, we have, today, an industry that has accumulated pension assets in excess of N13 trillion, invested in various aspects of the economy and still growing.”

Pursuant to its statutory mandate under Section 23(f) of the PRA 2014, PenCom has consistently undertaken public education, enlightenment and awareness campaigns on the CPS and other pension matters. It has also developed and established structures, systems and procedures that ensure transparency, accountability and efficiency in the administration of pension in Nigeria.

These systems and procedures have become reference points for other African countries, many of whom have undertaken study visits to the Commission.

“However, as it is the case with every human endeavor, retrogressive elements continued to exploit procedural gaps in the operations of pension practitioners in both the CPS and DBS to the detriment of unsuspecting public.

” Thus, new issues and challenges continue to emerge, which place special responsibility on the regulators, the operators and other stakeholders to constantly review their operating environment with a view to finding solutions to address the problems.”

She further said that the PRA 2014 had strengthened Nigeria’s pension institutions in both the Contributory and Defined Benefits Schemes, and imbued them with the capacity to rise above emerging challenges. Thus, while these institutions explore their respective…, the continued collaboration with the EFCC would certainly serve as catalyst for reducing the menace of fraud in the pension industry to the barest minimum.

“We must recognize the uniqueness of today’s workshop, which has literally taken our collaboration to the next level. Stakeholders have all converge to discuss within the two days of this workshop, the entire ramifications of fraud in the pension administration space, understand the issues, share experiences and find proactive ways of preventing their occurrence. “

She also commended the foresight and dynamism of the leadership of the EFCC for accepting to collaborate with us for this workshop despite the preponderance of other daunting challenges being tackled by the EFCC in our country.