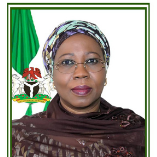 The Minister of State Federal Ministry of Industry, Trade and Investment, Amb. Mariam Yalwaji Katagum during the launching in Abuja on Monday, said the EEFP would help in the development of MSMEs sub sector.

Katsgum said, “This is very important in view of the fact that the first component of the Export Expansion Facility that is being implemented, is the Export Development Fund, which focuses on pre-shipment incentives or assistance with the MSMEs as the target group and possible beneficiaries”

“The import of this cannot be overemphasized in view of the significance of MSMEs and the critical role they play in the Nigerian economy, she sddd..

“To say that MSMEs have been affected by the COVID-19 Pandemic is an understatement. Players in the sector have incurred huge losses in revenue and investments, triggering immense job losses for a substantial number of them,” she said.

The Minister stated, “This is the basis for the inclusion of the MSME Survival Fund in the National Economic Sustainability Plan (NESP). This has led to massive impact within the MSME sector”

“As we speak, the Survival Fund has impacted close to a million MSME beneficiaries and still counting”.

She however said either way, “We must ensure that small businesses within the export-related sector benefit from the scheme in great numbers as this is the core objective of Mr. President’s approval of the scheme”

She expressed confidence in the leadership of the NEPC under the Executive Secretary, Mr. Segun Awolowo, to deliver on this task.

She recalled that the EDF Act came into existence in 1986 with the objective of providing financial assistance to exporting and potentially exporting companies to cover part of their initial expenses with respect to export promotion activities.

“Therefore, the provision of funds for the takeoff of the EDF, as provided in the EEFP, could not have come at a better time”.

`”The Export Development Fund would serve to compliment the other areas that were not covered by the MSME Survival Fund, for export-oriented companies,” she said.

`l”Therefore, transparent and seamless implementation of the EDF and indeed the EEF schemes offers the NEPC in particular, and the ministry in general, the opportunity to improve the performance of the non-oil sector as well as the current strategy and policies to diversify the productive base of the economy,” she said.

She commended the contribution of the Minister, Federal Ministry of Industry, Trade and Investment, Otunba Richard Adeniyi Adebayo, for providing direction and coordination and also the NEPC for implementation and all stakeholders for their tangible efforts thus far.