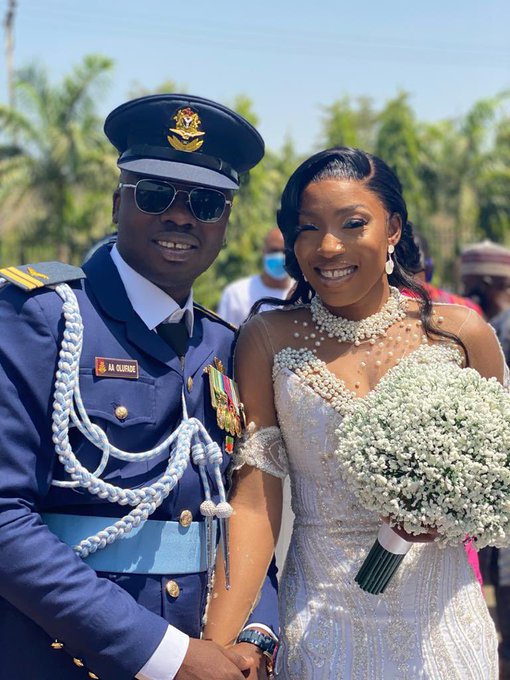 Co-pilot Flt. Lt Alfred Ayodeji Olufade, who died in the tragic incident, is survived by his new wife, who, according to relatives got married two months ago

Chief of Army Staff, Lt.-Gen. Ibrahim Attahiru, died in the crash on Friday.

A tweet by the Nigerian Air Force confirmed that the air crash, involving a @NigAirForce aircraft, occurred near the Kaduna International Airport.

The Air Force spokesperson, Air Commodore Edward Gabkwet, in the tweet, said that the immediate cause of the crash was still being ascertained.

Friends, family members and associates of a Nigerian Air Force pilot, Flt Lt Alfred Ayodeji Olufade, are inconsolable at the moment as the young officer, who recently got married, died when a Beachcraft 350 aircraft crashed at the Kaduna International Airport on Friday.

Olufade and the newly appointed Chief of Army Staff, Lt. Gen. Ibrahim Attahiru, as well as nine other military personnel were onboard the jet when it crashed around 6pm on Friday. The 11 souls died in the tragic incident.

Friends and associates of Olufade have since taken to the social media to express raw grief over the sad demise of the officer.

A tweep, @Sir_KB, wrote, “My heart is in pain. I lost my friend. Flight Lt. AA Olufade. He got hitched months back and often teased me to get out of the bachelorhood. Rest well Freddy.”

Also, @SodyBar stated, “Olufade is a close associate. He got married February this year. We’re all disheartened!”

“We’re all saddened by his death. Everyone affiliated with Kuje seminary will surely miss him. May the Almighty grant you eternal rest,” @EmekaWilfred wrote

I need prayers, late pilot my only son – Grieving dad
by Punch News
George Olufade, the father of Flt Lt Alfred Olufade, the pilot of the ill-fated aircraft that killed 11 military officers, including the Chief of Army Staff, Lt. Gen. Ibrahim Attahiru, said only prayers could sustain him as George was his only son.
He also decried the state of military aircraft in the country and called on the authorities to overhaul the planes and focused on staff welfare.
The late George got married three months ago amid pomp and circumstance.
The grieving father said, “It is devastating. I just need prayers for strength. I pray that God should hold us because he was my only son. He was very intelligent, generous, extremely humble, and dedicated to his duty. He was a giver and a lover of Christ.
“He was in the seminary before he eventually got into the military school.
“He was the only Airforce officer in my state. He was a special child. He graduated as the youngest in his set. When he wanted to join the military, I encouraged him from the beginning to the end because he had passion for flying. I encouraged him and prayed for him.
“They should take care of their planes. Most of their planes are outdated and not properly taken care of. They stress their pilots, too. He just returned from Maiduguri and he had to fly again. They need to take care of their planes before they lose all their brilliant talents.”
Olufade added, “Each time he was flying, he would tell me and I would pray for him. But this last one, he didn’t tell me. But God knows better. It has not been my prayer holding him, but God that has been holding him. God gave me Ayodeji and He had taken him; may his soul rest in peace. If it is from God, glory be to Him. If it is from man, God will judge.”