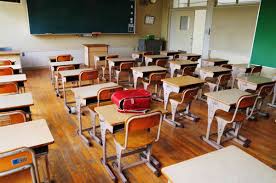 Teachers in the Federal Capital Territory FCT drove students away from classrooms as schools reopen Monday, October 12,, 2020 after a 7-month COVID-19 pendermi.
The anger of the teachers under the aegis of the FCT Council of the Nigeria Union of Teachers NUT claimed that the Area Council Chairmen in the territory have refused to implement the national minimum wage as well as payment of arrears.
Student are seen returning to their houses as early as 8a.m. on Monday while students of the junior secondary school were allowed in, as Secondary school teachers had earlier been paid by the FCT Administration.
Earlier in September, Chairman of the Union, Comrade Stephen Knabayi had directed members not to resume work whenever schools were reopened.
He said while the Federal Capital Territory Administration FCTA has commenced the payment of the new minimum wage, the six Area Councils in the territory who are saddled with the payment of primary school teachers have refused to budge.
When contacted on Monday, Knabayi said the strike is indefinite, since there is no serious commitment from the councils to implement the national minimum wage.
“The demand has to do with the payment of minimum wage for primary school teachers in the FCT. There are other things, but we are not joining issues. For a period of 18 months now we have been agitating for this payment and there has not been any serious commitment on the part of government, that is, the Area Councils. We have had several meetings but they keep reneging on agreements and we have not seen any serious commitment on the part of key players.
“That is just the issue on ground. The secondary school teachers had been paid some months ago by the FCT minister. This one is actually the responsibility of the Area Councils to pay the arrears and implement the minimum wage. The strike is an indefinite one. They have tried calling for dialogue to resolve but we have not seen anything concrete to take home to our members and so we decided to embark on strike with effect from today”, he explained.
In a letter dated October 7, the union had notified the FCT minister, Malam Muhammad Musa Bello of its decision to embark on strike.
The letter which was signed by the acting State Secretary, Comrade Margaret Jethro reads; “The Nigeria Union of Teachers (NUT) FCT Wing wishes to inform you that following the non-implementation and payment of Arrears of the New National Minimum Wage to the Primary School teachers in FCT and consequent upon the series of correspondences including a- seven day ultimatum issued to your administration to pay the New Wage, but the ultimatum expired on the 31st of August 2020, without the desired result;
“Consequently, the State Wing Executive Council (SWEC) of the Union at her emergency meeting of 3rd September 2020 resolved that except the new wage is paid to FCT Primary School teachers, that the affected teachers would not return to the classrooms after the easing out of the Covid-19 lockdown.
“In the light of the above, the Union hereby writes to notify your office of the commencement of an indefinite strike action by all Primary School Teachers in FCT from Monday, 12th October 2020 till such a time the new wage is implemented and arrears paid accordingly”.
The union in the notice of industrial action listed several steps it had taken before deciding to embark on strike.
Part of the notice reads; “The Union wrote several letters and held several meetings with the Area Councils Chairmen and other stakeholders on the need to pay the New Wage to the affected teachers. It is worthy of note that at one of the stakeholders meetings, it was agreed that by the end of the month of March, 2020 that the new wage would be implemented and Arrears paid but that has not materialize till date.
“Apart from the aforementioned, the Union further took the following steps to press home its demands:
“Held an emergency State Wing Standing Committee (SWSC) meeting on 8 June, 2020 and issued a communiqué indicating that the LEA Primary Schools teachers in FCT would not return to the classrooms after easing out of the Covid – 19 lockdown except the new wage is implemented and Arrears paid.
“Held an emergency State Wing Executive Council (SWEC) meeting on 25 August and issued a-7 day ultimatum from 25 – 31 August 2020 to the Hon. Minister of FCT.
“Held another emergency SWEC meeting on the 3 of September 2020 and resolved that except the new wage is paid that an indefinite strike action would be embarked upon by the Primary schools teachers on resumption of schools Consequent upon the above and having exhausted all the available industrial means without achieving the desired result, the Union hereby directs all Local Education Authority (LEA) Primary School teachers in FCT to proceed on an indefinite strike action from Monday 12th October, 2020.
“All Primary Schools teachers in FCT are hereby advised to stay away from the classrooms and await further directives from the Union”.
The FCTA had on October 8 slated the reopening of schools in the territory for Monday, October 12, announcing the cancellation of Third Term and equally warning private schools against demanding fees for the cancelled term.
FCT Minister, Malam Muhammad Musa Bello who gave the directive at a stakeholders meeting in Abuja however added that all boarding schools would be reopened a day earlier.
Following the enactment of the new National Minimum Wage Act 2019 (as amended) and consequent upon the Presidential approval for the implementation for employees in the Federal Public Service with effect from 18 April 2019, the Federal Capital Territory Administration FCTA in January 2020 commenced the implementation and paid arrears of the new wage to FCT workers including teachers in Junior and Senior Secondary schools. Area Council Chairmen however refused to implement the new wage.