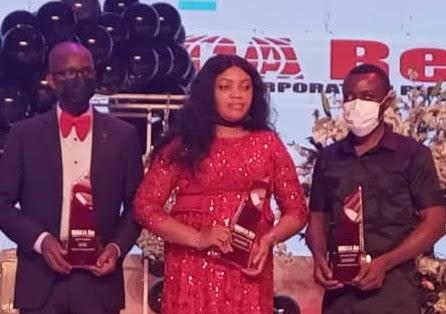 The West African Insurance Companies Association Reinsurance Corporation (WAICA Re) has awarded Mr. Ejike Nwankwo with $100,000 for winning the 2021 competition on how to manage plastic waste to prevent flooding

Apart fom the $1000,000 to help him with his iniative, Ejike Nwankwo also went home with $5,000 as an ambassador for 2021/2022 a the just concluded 47th African Insurance Organization (AIO) Conference held in Lagos.

Speaking the awards, the Chief Operating Officer of  WAICA Re, Dr. Abiba Zakariah stated that the corporation came up with this initiative as part of its Corporate Social Responsibility(CSR) to end drought, flood and deforestation across Africa, especially, West African region.

Zakariah stated that the projects proffered practical solutions that can be replicated across Africa, saying, WAICA Re is ready to continue to support such initiative with $100,000 annually.

This is to ensure that Africans see themselves as solutions to African problems, she said.

She disclosed that the winner of the competition now becomes WAICA Re’s goodwill ambassador for a year, even as the reinsurance firm would support. the winning project with $100,000, while such ambassador will have a cash reward of $5000 and $2000 respectively, she stressed.

The former Secretary General of AIO, Prisca Soares noted that the devastating effects of natural disasters, which might also be linked to climate change in most countries on the continent is better imagined, adding that, the untold and undocumented hardship on the communities and worsening poverty situations, are gaps insurance policies do not cover.

According Soares, “So, beyond insurance policies, we must find practical solutions to some of these natural disasters as responsible citizens and corporate organizations. We may not have the power to stop natural disasters. Still, we can pull resources to alleviate their impact and reduce their frequency when we remove the human contributory factors,” she pointed out.

She applauded WAICA Re for spearheading such an initiative in West Africa by focusing its attention on finding practical solutions to natural disasters in the region.

She noted that, WAICA Re’s maiden edition of the CSR Competition and Ambassador for 2021 has been able to push discussions on the Environment to the forefront of burning issues.

Established in 2011 with the philosophy of strengthening the financial sector of the sub-region by providing greater and viable insurance and reinsurance capacity, the Corporation said the theme of its CSR competition is “Practical Solutions to Natural Disasters in West Africa.”

WAICA Re has made giant strides because of the inestimable supports it is getting from the reinsurance market across Africa, Middle East and Asia.