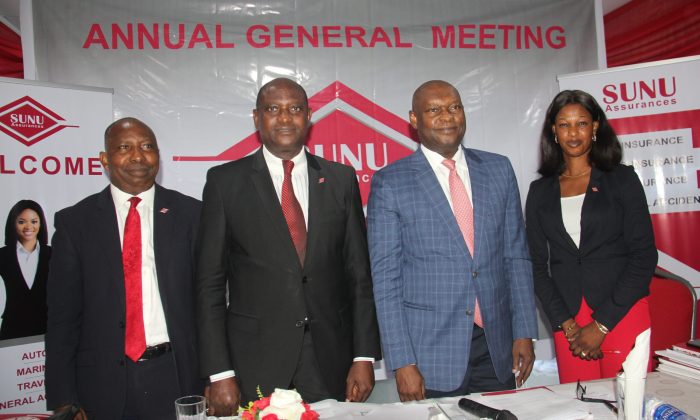 SUNU Assurances Nigeria Plc has announced a Gross Written Premium (GWP) of N4.209 billion in the financial year 2020.from N3.060 billion in 2019

This represented growth of N1.149 billion in value and 37.5 per cent in percentage terms and the growth was due to the Group’s strategic decisions on revenue generation.

The Group operating expenses for 2020 totalled N1.846 billion, which was 3.5 per cent decrease when compared to 2019 figure of N1.913 billion. This decrease was as a result of the Group’s deliberate strategy to improve its operational efficiency using information technology.

The investment income for the year amounted to N345.58 million, a decrease of 52 per cent over 2019 figure of N719.53 million. This was attributed to the fall in investment rate on placements held with financial institutions and FGN Securities in most part of 2020 financial year when compared to 2019.

The company recorded a loss before taxation of N188 million in 2019, despite the effects of COVID -19 pandemic.

The Chairman of the company, Kyari Abba Bukar while presenting the results to shareholders today at the 34th annual General Meeting of the Company held in Lagos, said he excited that the Group has returned to profitability during the year under review.

He disclosed that the company has proceeded with its plan to raise capital, noting that the Board of Directors in exercise of the mandate by Shareholders mandated SUNU Participations Holding SA and SUNU Assurances Vie Cote D’Ivoire SA on behalf of the company to pay-off the holders of all the JPY1,350,000,000 Zero Coupon Bonds 2026 issued by the company the sum of USD$7,800,000.00, representing the outstanding indebtedness owed to the Bondholders by the company as at 31st December, 2019.

He explained that upon the repayment of the debt, the total refinancing amount which was converted to equity through the allotment of ordinary shares to SUNU Participations Holding SA and SUNU Assurances Vie Cote D’Ivoire SA was agreed at N3,010,800,000.00 ($USD7,800,000 converted to Naira at N386/USD$1 using the exchange rate at I&E window at the date of the consummation of the transaction).

He said: “The issuance of 3,010,800,000 ordinary shares of 50 kobo each at N1.00 per share by way of private placement to SUNU Participations Holding SA and SUNU Assurances Vie Cote D’Ivoire SA was completed with the regulatory approvals received from NAICOM, SEC, Federal High Court, NSE, CSCS, CAC and FRCN.

“The shareholders fund increased from N3.66 billion as at 31st December, 2020 to N6.67 billion as the date of the AGM. It is expected that the second stage of the raising of additional capital by way of Rights Issue of N3.5 billion would commence in July 2021 and would be completed by 30th September, 2021.

“I would therefore urge the minority shareholders to take advantage of the Rights Issue offer to increase their shareholding given the requirement of the free float rule of the NSE which requires the company to maintain twenty percent (20%) of its issued share capital to be made available to the public and held by not less than three hundred (300) shareholders,” he added.