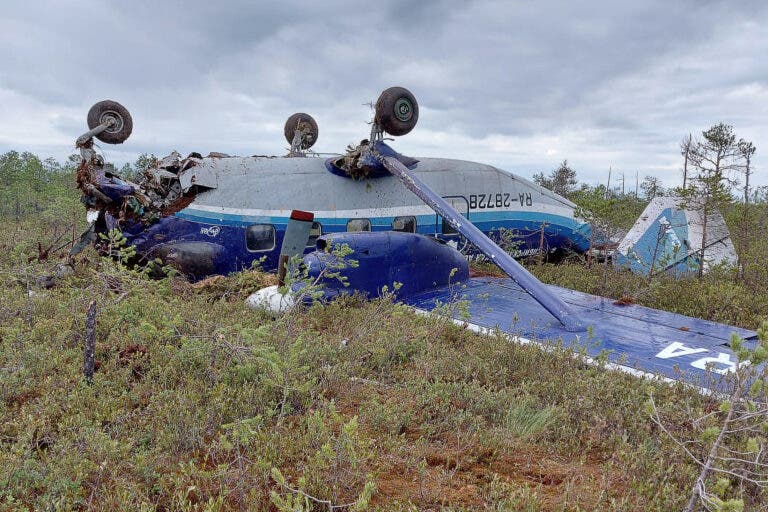 All 18 passrngers aboard a Russian Antonov An-28 passenger aircraft are safe following a hard landing in Siberia.

The aircraft, holding registration RA-28728, belonging to SILA Siberian Light Aviation, was performing a flight from Kedrovy to Tomsk in Russia when it suddenly disappeared from the radar. At the time of the disappearance, the aircraft was approximately 100 nautical miles northwest of Tomsk in western Siberia.

A signal from the aircraft’s Emergency Locator Transmitter (ELT) was picked up near the village of Bachkar, and a search and rescue team were dispatched to the site. When the rescuers arrived on the scene, they discovered the plane upside down.

Despite the crash landing, all the passengers and the three crew except for the pilot, who had a broken leg, survived the landing with just cuts and bruises.

According to Russian media sources, the crew did not report having difficulties, although people on the ground say at least one or both engines on the aircraft had failed. Russia’s Ministry of Emergencies reported that 12 people were transported to a hospital in Tomsk via a helicopter, and the rest were taken via bus. When reporting on the incident, international newswire service Reuters quotes regional governor Sergei Zvachkin as saying:

“We all believed in a miracle, and thanks to the professionalism of the pilots, it happened; everyone is alive.”

When reporting on the crash, Reuters quotes sources from TASS as saying: “The AN-28 plane turned over during its hard landing. Its nose has been damaged as well as its landing gear. The crew was forced to make an emergency landing due to what looks to have been engine failure, although that is not yet conclusive.”

The plane was 32-years-old

This latest incident involving a Soviet-era aircraft in Russia’s far east comes just ten days after an Antonov An-26 crashed into a cliff on the Kamchatka peninsula, killing all 28 people onboard. Manufactured in Ukraine during the time of the Soviet Union, Antonov planes are still widely used throughout Russia and the former Soviet states.

According to Interfax, the aircraft was built in 1989 and used by Russian national flag carrier Aeroflot in Kyrgyzstan before going into service with SiLA in 2014. Based at Magadan Airport (GDX) in Sokol in Magadan Oblast, Russia, SiLA operates a fleet of four An-28s and seven Czech-built Let L-410 Turbolet planes.

In 2012 an An-28 operated by Petropavlovsk-Kamchatsky Air Enterprise crashed near Palana Airport (UHPL), Kamchatka peninsula, killing ten of the fourteen people onboard. Investigators later determined that the plane had initiated its descent too soon and struck trees. It was also discovered that both of the plane’s pilots were drunk at the time of the crash.