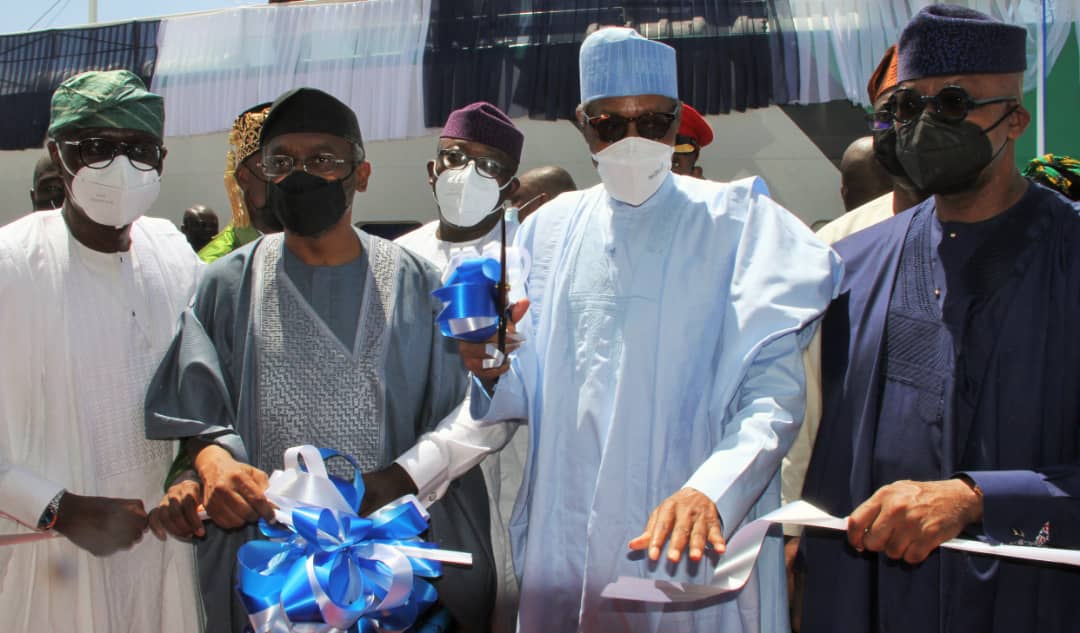 The president, while flagging off the project started in March, 2017 for full commercial operations at the Mobolaji Johnson station in Alagomeji, Ebuta Metta, Lagos, pledged the commitment of his administration to the continuous infrastructural development of the country in Lagos yedterday

He noted that right from the beginning of his administration, railway infrastructure development has been given the priority it deserves and various milestones have been reached, right from when the Abuja-Kaduna railway was flagged off for commercial operation in 2016 to the Lagos-Ibadan railway project being commissioned for full commercial operation.

According to the president, the inauguration and flagging off of the project signal yet another milestone in the drive of the present administration in revitalising the railway system, establish it as a choice mode of transportation for both passengers and freight and position it as a transportation backbone that can transform industrial and economic activity in the country

This vital line establishes an end-to-end logistic supply chain in railway transport within its short corridor, Lagos-Ibadan, as goods to the hinterland would now be transported by rail directly from the Apapa port Quayside straight to the Inland Container Depot located in Ibadan from where it can be distributed to other parts of the country,” he said.

He added that in clear recognition of the challenges posed to the country’s economic growth by the absence of strong and effective infrastructure, “we have in the rail sector, further to other ongoing railway infrastructure projects, embarked on the completion of the outstanding segment of the Lagos-Kano railway, which is Ibadan-Kano”.

The Lagos-Kano railway project, when completed, will link the Kano-Maradi line at Kano and a rail link from the Nigeria southern ports of Lagos to Maradi in Niger Republic will be ,” he said.

Buhari noted that the connection through rail would position Nigerian ports as the choice for import and export business of the people of landlocked Niger Republic, stating that it would be beneficial to the economy through employment from new business opportunities and wealth creation.

He further stated that the Federal Ministry of Transportation and Ministry of Finance have been directed to vigorously act on engagement and reaching financial agreements with appropriate co-financiers to partner with the federal government for the development of the Ibadan-Kano railway and the connection to the Tin Can Island port as well as the West – East coastal rail line from Lagos to Calabar linking Onitsha, Benin, Warri, Yenagoa, Port Harcourt, Aba and Uyo.

“This is already yielding the desired result as construction activities on the railway segment, Kaduna-Kano has commenced with back-end engineering activities
will at this juncture, commend the Honourable Minister of Transportation, Rt. Hon. Rotimi Chibuike Amaechi, for his drive and tenacity to achieve the milestone recorded today.

“He has a wonderful team in the Ministry that is helping in achieving this feat. Well done to you all,” he said.

Speaking earlier, the Minister of Transportation, Mr. Rotimi Amaechi, hinted that the project will be the third rail project commissioned by the president
According to him, “First was the Abuja-Kaduna, Warri-Itekpe and now the Lagos to Ibadan. This is one project started and ended by this present administration.”

“It is indeed a pride to see a project start and end within the life span of an administration. The social and economic importance of this project cannot be over emphasised.

The commissioning of this rail line has made it possible for people to work in Lagos and live in Ibadan,” the governor stated.

Also, the Chairman of the China Civil Engineering Construction Corporation, CCECC, which handled the project, Mr. Jiang Yigao, said the company has been in Nigeria for 40 years and this is one of the biggest projects it has handled.

The Chairman, Nigeria Railway Corporation (NRC) board, Mr. Alhassan Musa Ibrahim, said the project encountered a lot of challenges but the persistence of the government ensured its conclusion.
According to him, “The Nigerian Railway Modernization Project, Lagos-Ibadan section with extension to Lagos Port at Apapa starts from Lagos, the largest Port City in Nigeria, and runs north-eastward through Abeokuta to an industrial city Ibadan.”

The length of the main line is 156.8 km with 6.51km extension to Apapa Port. It connects three important states in the South-west region namely Lagos, Ogun and Oyo States.

The project adopts China Railway Standard, with a designed speed of 150 Km/h. It is a double-track standard gauge railway, using diesel traction and automatic blocking system

The project will improve the Nigerian transport infrastructure and enhance better layout of the national railway network.

It will facilitate better interstate connection in Lagos, Ogun and Oyo States respectively, accelerate industrialization and urbanization of regions along the line and foster integrated economic development.
The operation of the rail line will facilitate mass movement of passengers, reduce the traffic pressure on the road, lower the rate of road accidents and promote safety of travellers.