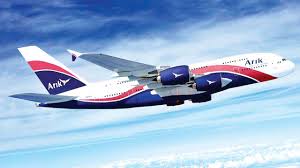 Arik Air has announced the suspension of it flights due to the 24 hour curfew imposed on Lagos State by the Governor, Mr Babajide Sanwo- Olu.

This is just as some foreign airlines have also announced cancellation of flights due to the current protest and unrest in the country.

The airline Communication Manager, Mr Adebanji Ola yesterday said : “Arik Air has cancelled all its flight operations for Wednesday, October 21, 2020 in compliance to the 24 hours curfew announced by the Lagos State government on Tuesday, October 20, 2020”.

Recall the 24 hour curfew took effect yesterday, Tuesday throughout the state to forestall further burning of government and private properties.

Thugs have infetrated and hijacked the protest that started peacefully throughout the country.

Other airlines might likely join in the cancellation of flights as prospective passengers will not be able to access the Airports.

Meanwhile, some foreign airlines have announced the suspension of flights to Nigeria due to the current protest. United States owned airline, Delta, in its advisory said flight DL248 ATLLOS for October 19, 2020 scheduled to arrive LOS on Tuesday Oct 20, 2020 will not operate due to the 24-hour curfew imposed by the Lagos State Government.

According to the airline, “Consequently, Flight DL249 LOSATL scheduled to operate today October 20, 2020 has also been canceled. Further details on flight operations will be duly communicated. We truly regret any inconvenience”

Also Ghana based airline, Africa World Airlines (AWA) yesterday said due to “curfew in Lagos, tonight, we will cancel flights for October 20 and October 21, 2020”.

Kenya Airways has also cancelled flights to the country. The airline said : ” We regret to inform you that KQ533 scheduled to depart 21/Oct/2020 from LOS – NBO has been canceled due to the 24Hrs curfew imposed by the Lagos State Government”

“We implore you to communicate with your guests as soon as you can. Thank you for your patience and understanding”, the airline added.

It also said in a statement that it was planning to send out another communication with regards to “re-protection and flight operations for the affected guests” as soon as they have an update.