A Nigerian man, Emmanuel Ikechukwu Umenyiora, has become the first Igbo language lecturer at the University of Oxford in the UK.

As Oxford University gets her First Igbo Language Lecturer, Emmanuel took to his Twitter page to share the news, after his induction which held on Thursday, February 17.

Emmanuel shared the news on Twitter after his induction which held on Thursday, February 17. He wrote;

”It is official that I am the first official Igbo Language lecturer at the number one university in the world, the University of Oxford.

This became possible in account of the James Currey Society. This is the first time Igbo language will be taught at the university. History has been made. I am so happy and grateful for this opportunity. I promise to make the Igbo language and culture known to the world.” 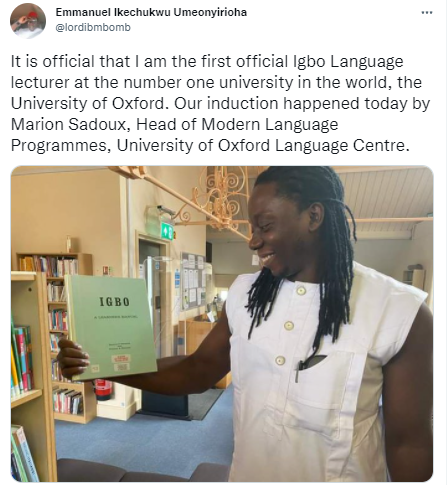