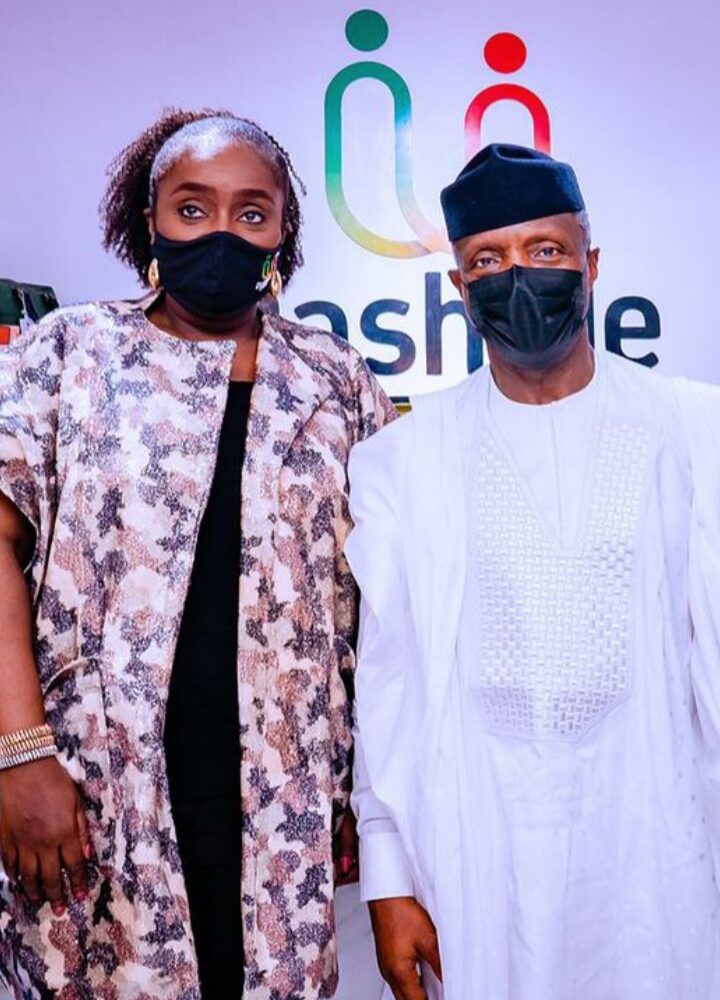 Former Finance Minister, Mrs. Kemi Adeosun, has bounced back to public glare, but this time she is involved in charity, giving help to the indigent through a Dash Me Store (DMS) for meeting their needs.

The store is established to mobilise resources for onward distribution to vulnerable people in the society via grassroot charities.

DMS is an outlet of the Dash Me Foundation (DMF) of Mrs. Adeosun, which Vice President Yemi Osinbajo inaugurated on Sunday.

At the event, Professor Osinbajo said one factor responsible for the impactful implementation of the Social Investment Programmes (SIP) of the Buhari administration over the years is the realization that you can’t reach Nigerians if you don’t have a plan for the grassroots

This realisation then influenced the structure designed for the SIP and is largely responsible for the successes of the programme (which is now regarded as one of the biggest social welfare schemes in the continent).

According to the Vice President, “I am excited to be here for several reasons, but most of all because of Mrs Adeosun’s commitment to the notion that all service to man is actually service to God, and she took that very seriously.”

He noted that “this is why, as Minister, she prioritised the Social Investment Programmes, when for the first time, the country voted almost N500B of our annual budget to welfare programmes which are called the Social Investment Programmes, which involved engaging 500,000 young men and women, and also giving microcredit to about 2 million traders and also a home-grown school feeding programme for 9.5 million children daily in public schools across the country.

“I am therefore really not surprised that she has decided to use some of her enormous talent and influence to establish an organisation that raises funds and provides resources for indigenous grassroot charities working with orphaned and vulnerable children, disadvantaged youth, and victims of domestic violence.”

Speaking on the establishment of Nigeria’s first thrift-for-charity online store, Prof. Osinbajo said adding social enterprise to philanthropy with a structure that allows for resource mobilization for charity as well as creates the opportunity for people to earn a living in the process, should be the way to go.

His words: “what I think is happening here is that philanthropy is not like it used to be when all you needed was a good and kind heart and you didn’t need to plan or organize as you would a business for-profit.

“What Kemi and her team have done is to bring the new notion of social enterprise to this project. Philanthropy run with the discipline, attention to detail, and financial prudence of a successful business, and she can do all of that, and I am sure her team is imbibing that, given her background in finance in both private and public sector.”

Continuing, he said “the idea of this thrift-for-charity store is brilliant and the first of its kind in Nigeria. It is a unique model which does not just give to the needy in the conventional way of merely handing out donations.

“It is an innovative and structured way of aggregating donations to earn income to transform the lives of the vulnerable and needy while creating jobs in the process.

“I must say that your focus on funding grassroots charities is so crucial and I know that, having campaigned with you on behalf of our party, the APC all around Ogun and in every part of Nigeria, it is clear that you can’t reach Nigeria and Nigerians if you don’t have a plan for the grassroots.”

Earlier in her remarks, Mrs Adesoun said the idea of the store is to aggregate donations of different kinds for charitable causes, noting that Nigerians from different fields of endeavour and from across the country would be enabled via the online store to contribute to supporting the needy in the society.

She said the organization would work closely with charitable organisations in the grassroots to ensure that funds and other materials donated via the Dash Me Store get to actual beneficiaries.