The Chairman of the United Bank for Africa (UBA) and Heirs Holdings, Mr Tony Elumelu has commended the National Insurance Commission, Naicom for the investor- friendly act which made it possible for Heirs Insurance and Heirs Life to come on board after 8 years.

Elumelu in his Keynote address at the 60th anniversary celebration of the Nigeria Council of Registered Insurance Brokers, NCRIB, said it took the companies 8 years trying to process the establishment of the two insurance companies which was possible under the tenure of the Commission For Insurance, Mr Sunday Thomas.
He said UBA has established office in over 20 countries including the United State of America but in all of them, Nigeria’ laws are investor-friendly than the countries they mark their present in.
“Africa’s global bank present in 20 African countries including France, USA, UK, and the UAE And the catalytic work” 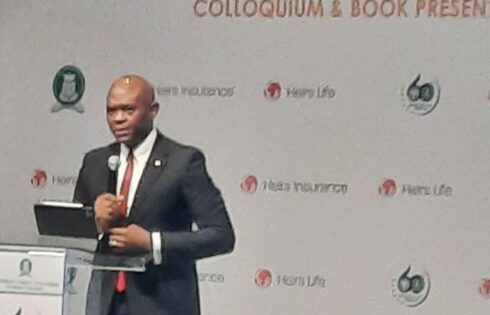 Giving his inspiration to the banking industry, he recalled, “In those days when I was in university, what drove me to want to join banking?  it was the profile of bankers, sharp suits, nice carsIt’s funny now that I think about it, but little things on how the people that worked in banking looked made me aspire to the banking profession.
He added that even in his foundation, what we do at the Tony Elumelu Foundation in empowering young Africans across the 54 countries on the continent So far, over 15,000 young African entrepreneurs have benefitted directly from the Foundation through the provision of a $5,000 non-refundable seed capital, alongside business training, mentorship, and market access to these young African entrepreneurs.

28th FAIR conference to hold in Abu Dhabi next year