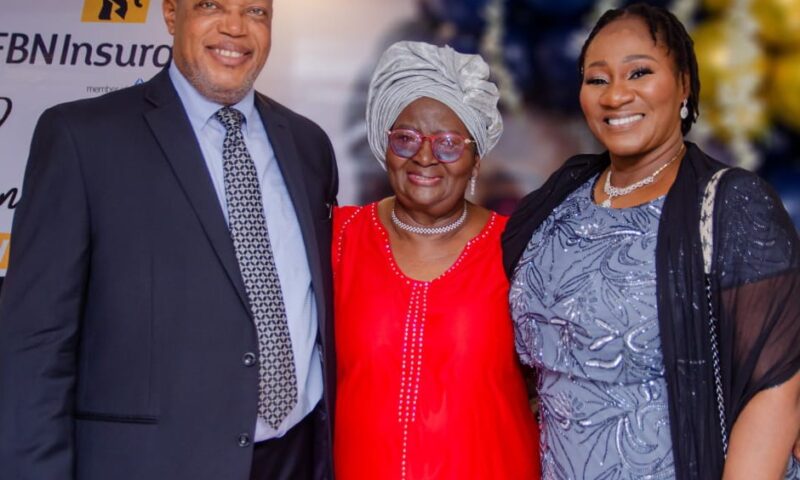 CAPTION:
L- Mr. Val Ojumah, Managing Director/Chief Executive Officer, FBNInsurance Limited; Mrs. Adenrele Kehinde, Chairperson, FBNInsurance Limited, and Mrs. Tobore Ojumah, at the send forth dinner of Mrs. Adenrele Kehinde in Lagos.today
By Favour Nnabugwu
The Board, Management, staff of FBNInsurance Limited, have extolled the outgoing Chairman, Mrs. Adenrele Kehinde who mantra is the result of head work is more work as an advocate of high ethical standards a farewell.
The  Managing Director of the company, Mr. Val Ojumah said Mrs. Adenrele demonstrated brilliance, excellence and a high level of professionalism and strong competence on the job.
Ojumah also described Adenrele as an advocate of high ethical standards who regularly challenged the company’s executive management to deliver industry-leading results using her usual mantra “the result of hard work is more work.”
Lending his voice, the Chief Executive Officer of FBN General Insurance Limited, Mr. Bode Opadokun who applauded Adenrele for her openness and professionalism. He added that though she has retired, the company would continue to draw from her wealth of experience.
A Non-Executive Director, FBNInsurance Limited and Chief Financial Officer of FBNHoldings, Mr. Oyewale Ariyibi commended Adenrele for dedication and leadership which he said brought some innovation and initiatives to FBNInsurance.
“She believed strongly in the name of the institution, leadership of the board and management, Mr. Ariyibi added.
Chief Executive Officer, Salam Pan-Africa Life Insurance, Mr. Robert Dommisse, , also commended the outgoing chairman for her dedication, commitment and passion for the growth of the company.
Dommisse who described Adenrele as a good negotiator, a woman who never accepts no for an answer when it comes to negotiating for anything for her company.
Chairman, Bi-Courtney Group of companies, Mr. Wale Babalakin, was not left out in the commendation as he  commended Mrs. Adenrele for her support and selflessness.
Babalakin narrated how with the help of Mrs. Adenrele, he was able to secure a loan from a bank at the age of 28 to build an 11-storey building.
In addition to these great achievements and commendation, Mrs. Adenrele will also be remembered for her contribution to the tremendous growth that FBNInsurance enjoyed under her leadership. Under her watch, the company’s gross premium grew from N3.9 billion in 2013 when she joined to N38.6 billion as of December 2021.
In her response, Adenrele, reiterated the need to sustain the growth that the company has achieved over the years. “We must remain keen to attain uncontested leadership status in the life insurance sub-sector and growth of our General Insurance business. She also added that the brand must remain focused on its goal which is to exceed expectations, break records and delight customers and shareholders in a greater measure than in the past.
Adenrele was appointed to the board of  FBNInsurance Limited as Chairman in May 2013, following her earlier admission into the Board in March of the same year as a Non-Executive Director. She however took over the leadership of the Board from Mrs. Ibukun Awosika, the pioneer board Chairperson.
Before her appointment to FBNInsurance was a Non-Executive Director in FBNCapital Limited, now FBNQuest Limited. 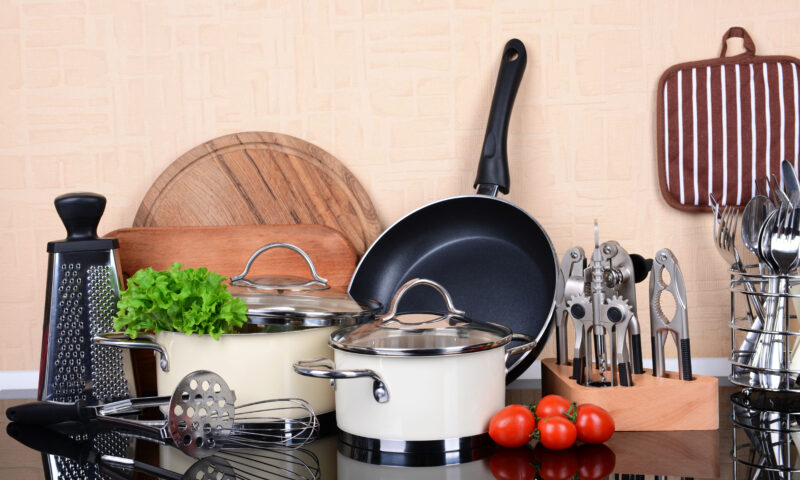 Expenditure of household consumption rises to 25% in 2021

According to its Nigerian Gross Domestic Product (GDP) Report: Income and Expenditure approach for third and fourth quarter of 2021 (Q3,Q4’21) , the fall in Government expenditure was due to the efforts of government policies on COVID-19 during the period.

The report stated:”Overall, in 2021, real household final consumption expenditure inclined by 25.6 per cent from -1.69 per cent recorded in 2020. The observed trend in 2020 indicates that real household consumption expenditure declined in Q1 and Q2 accounting for negative growth rates informed by the COVID 19 pandemic.
“However, positive growth rates were recorded in Q3 and Q4 2020 as well as the Q4 ’21.

“With annual growth rate standing at -34.03 per cent, the 2021 performance indicated lower growth compared to the preceding year of 2020 at 61.5 per cent due to the efforts of government policies on COVID-19.”

“Nigeria’s real GDP at basic prices
In Q3 2021, the Gross Domestic Product inclined in real terms by 4.03 per cent YoY and recorded 3.9 per cent in Q4’21. This shows a sustained positive trajectory since Q4′ 20.

The bureau further said that net exports and imports fell in 2021 resulting in a fall in the growth of net balance of trade in Q1-Q3 of 2021.

“This indicator had recorded negative growth since Q2’20 but stood positive in Q4 ’21. 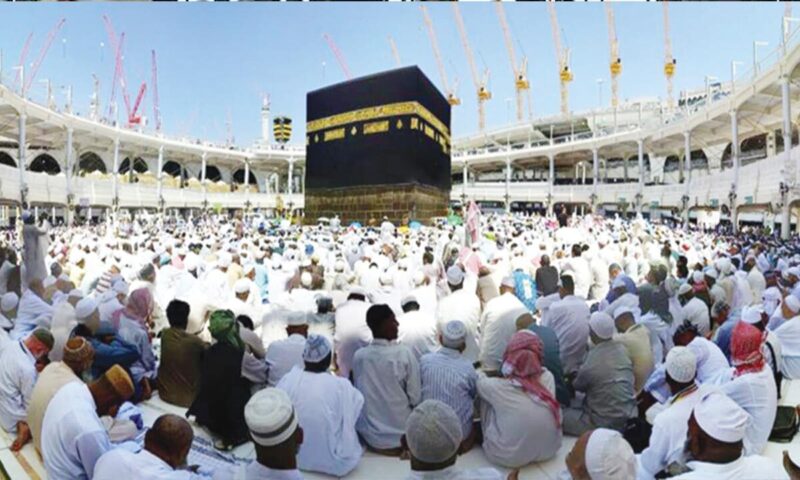 This is to ensure that each State are equitable distribution of Hajj seats to pilgrims,

NAHCON has allocated seats to states using a commendable 2019 airlift performance yardstick to States and private Tour Operators. A total number of 33, 976 were distributed to states and 9,032 set aside to be shared to registered private tour operators.

The civil society in a statement signed by its national coordinator Ibrahim Muhammed said it has instructed its members across the states to liaise with the leadership of the boards and agencies in the states to know the number of intending pilgrims that has been are able to meet the criteria set by the National Hajj Commission of Nigeria (NAHCON), and those that are eventually selected to perform 2022 Hajj.

The IHR said it is already aware that Saudi Arabian authorities have limited the maximum age of those who can perform Hajj 2022 to 65 years. This criterion alone, it said, will disrupt the philosophy of ‘first come first serve’ because there are pilgrims who paid much earlier than others but are above 65 years.

The CEO also said the projection of N2.5 Million as Hajj fare will also affect the outcome because not all those who are in priority list will be able to pay up the balance of their fare as at when due.

However, IHR advised that those who paid in 2019 should be given the right of first refusal before 2020, and 2021 depositors. This sequence of distribution should also supersede the NAHCON/SMPWBS’ 60/40 seat formula.

IHR further appeal to States Muslim Pilgrims Boards Executive Secretaries not to succumb to Politicians who may put pressure on them to allocate Hajj seats to their political foot soldiers at the detriment of intending pilgrims.

“With a few days to the primary elections of major political parties, desperate politicians may likely want to hijack Hajj seats as part of political favours to woo delegates or influence support to their candidature.

Saudi Arabia has allocated 43,008 Hajj quotas to Nigeria for this year’s pilgrimage after 2 consecutive years of suspending Hajj due to the Corona Virus pandemic. 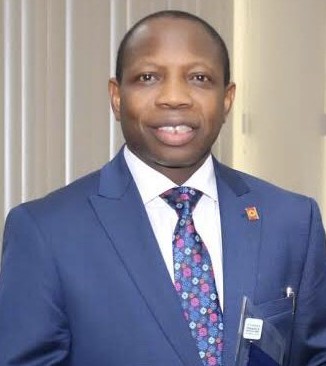 As the Africa Insurance Organisation, AIO, celebrate it 50th anniversary next month, the president of the AIO,  Mr Tope Smart, wants industry in the member countries to liaise with government to raise insurance penetration in Africa..

Smart said this could be achieved via solutions that improve access to insurance, the reputation of the African insurance industry and insurance awareness in Africa.

Furthermore, governments are increasingly using insurance to achieve public policy objectives and the AIO, again through its advocacy role, shall seek to advance the policy interests of Africa’s insurance industry, to create a conducive and enabling environment for insurance in Africa to thrive.

“The African insurance industry still suffer from very low insurance penetration rates when compared to global rates with an average of less than two per cent if we remove South Africa, this shows the weakness of our industry, and the vast potentials to be exploited”

The 48th AIO Conference will focus on one of the key global issues, Climate Change under the theme ‘Insurance and Climate Change: Harnessing the Opportunities for Growth in Africa’.

The AIO  who doubles as the Group Managing Director/ CEO, NEM Insurance Plc recalled that In 2018 Lloyd’s publication, even a 1% increase in insurance penetration will reduce the disaster recovery burden on developing countries by 22 percent”

“We believe it is our mission to improve insurance penetration via solutions that improve access to insurance, the reputation of the African insurance industry and insurance awareness in Africa, he added.

On African Continental Free Trade Area (AfCFTA) he said is set to become the world’s largest free trade area in respect of the numbers of participating countries. It is one of the flagship projects of the African Union’s Agenda 2063: “the Africa We Want”.

“We believe that the AfCFTA could play a significant role in improving insurance services through liberalization (eliminating non tariff barriers and refraining from introducing new ones) and integration. The AIO shall advocate for integration of the African insurance industry in the AfCFTA implementation.

Activities to mark this milestone anniversary will hold in Nairobi, Kenya alongside our 48th Conference and Annual General Assembly. The host Kenya market and the AIO Secretariat have been working tooth and nail to make the celebration a memorable one.

However, this can only be achieved through insurance industry support. I wish to appeal to AIO members to come out in their numbers and give their flagship event its merited grandeur. 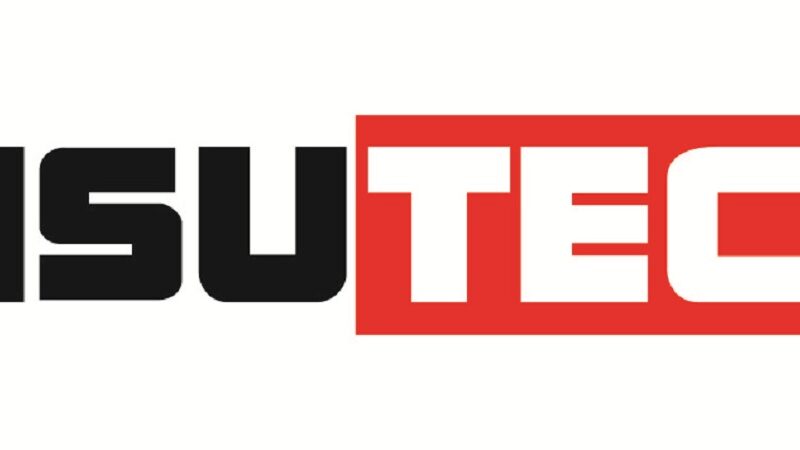 For the record, insurtechs managed to raise 15.7 billion USD of funds in 2021 and recorded 58 M&A deals. In 2022, a quarterly record has been reached with 26 mergers closed within three months

AXA Mansard, the Nigerian subsidiary of the French group AXA, has recorded a 14 percent increase in its turnover in Q1 2022.

Life and health premiums increased by 58% and 24 percent respectively, while non-life premiums decreased by 5 percent

During the period under review, the net profit amounted to 390 million NGN (396 000 USD), falling by 85 percent compared to 2.63 billion NGN (6.92 million USD) posted during the first three months of 2021. This decrease is due to higher health claims and foreign exchange losses.

For the 2022 financial year, the Nigerian insurer expects to improve its operational performance, investments and underwriting.